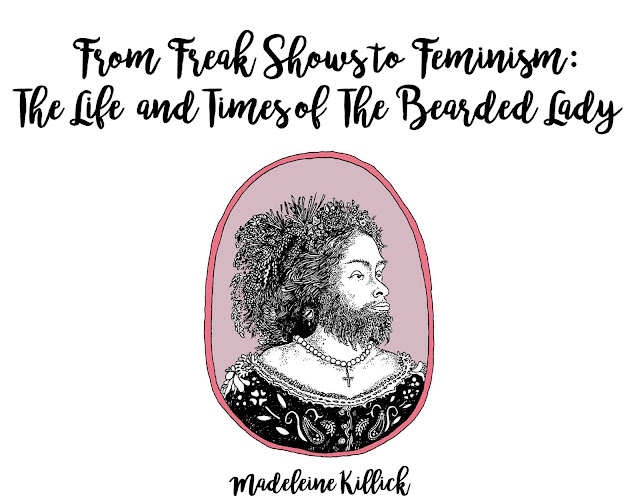 The modern man might indulge experiments with in retro beard styles and grooming products, but for centuries the ‘Bearded Lady’ has been subject to persecution, public humiliation – and even cruxifiction. Maddy Killick takes a deeper look into the hairy history of the Bearded Lady:

No longer is the ‘beard’ a defiant symbol of one’s laziness or eccentricity: it is a trend, a hobby, a ‘Movember’ fundraiser- it is a cult that has developed faster than the bumfluff of a pubescent boy. With ‘tache’ oil flying off the shelves and pageant-style ‘Beard Conventions’ dominating arenas across the world, the beard is the modern man’s rendition of the ‘80s perm.

Whilst Leonardo di Caprio may have gained an Oscar this year, he didn’t quite grasp the hang of a beard but hey, he tried. Then again who hasn’t? From the budding craft-beer hipsters of East London, with their scruffy-chic beards and compulsory hair-buns, to Eurovision’s stubbly siren Conchita Wurst aka Thomas Neuworth, these days you can’t get away from some face fuzz.

Just as our drains are now prone to being permanently clogged with tufts of regret and forgotten beards of the past, our Instagram feeds are congested with images of glittery goatees and beards embellished with daisies. Is that macho – or metrosexuality? Hard to tell. After all, cavemen are said to have needed facial hair to brave the elements whilst their feeble, follicle-free female counterparts minded the cave. Beyond the Ice Age and, yes, the Sex Discrimination Act of 1975, it remains unfashionable for women to disclose any form of body hair, especially the facial kind.

The hoo-ha surrounding society’s obsession with the latter is comparable to John Ruskin’s repulsion towards his own wife’s ‘hoo-ha’ and preference for the girlish form of young girls. If woman does not present herself as some smooth, baby-skinned goddess, she might as well be Medusa- no wonder why Botticelli entitled his painting ‘The Birth of Venus’… And, given that women continue to pay ‘Pink Tax’ for female grooming products, it’s unsurprising that Medusa used her lethal locks to turn men into stone- she was probably enraged by the price of a ‘Venus’ razor at Boots.

Woman may have been created from the rib of man, but scientifically speaking, all foetuses start out as female. Even so, men don’t have to worry “does my beard look big in this?” Nor do they have to spend hours meticulously planning their next wax appointment. But they can get away with showing a bit of stubble and continue to be hailed as ‘sex-gods’- even though their ‘sexy apparatus’ can contain more bacteria than a dirty toilet.

Yet at least 40 percent of women have some sort of facial hair; a reality ignored and feared, regarded as unacknowledged and shameful. But in ancient legend and myth, women grew beards out of sheer piety and sexual purity- and they were celebrated for it. According to Hippocrates, the goddess Phaethusa of Abdera sprouted a beard out of love for her husband Pytheus. And, in other tales, the female beard has been regarded as an emblem of faith and devotion. In taking her vow of virginity, the fourteenth-century saint, St. Wilgefortis, prayed for help in resisting marriage to the King of Sicily. Consequently she grew a beard as a visible sign that she belonged exclusively to God, though it did lead to her pitiless crucifixion.

Unless you’re Conchita, or another hairy lad in a sparkly dress that looks as if it were borrowed from Kim Kardashian, the plight of the ‘Bearded Lady’ has never been easy. Often considered as dirty, cursed and beastly, women with excessive facial hair were vilified by the 19th century entertainment industry. With extreme images of physically unusual humans, the Victorian ‘Freak Show’ appealed to an era of curiosity that was fascinated by irregular human characteristics, diseases and performances: “These are thy freaks, SENSATION” wrote Dublin University Magazine in 1864.

The ‘Bearded Lady’ was quite the phenomena in these shows, with some ladies becoming star attractions by their own right. Clémentine Delait attracted spectators from afar when she established ‘Le Café de La Femme a Barbe’- ‘The Café of the Bearded Lady’, and Jane Barnell, who was otherwise known as ‘Lady Olga’, appeared in Tod Browning’s film ‘Freaks’ (1932), though her mother sold her to the circus at the age of 4…

But the leading lady of them all was Julia Pastrana, a Mexican woman born with Hypertrichosis, a condition that caused her to be severely deformed and hairy. Pastrana was advertised as a ‘Bear Woman’, and even Charles Darwin described her of having a “gorilla-like appearance.” However, Pastrana went on to entrance the world with her dancing and music playing abilities in her touring show, but that was not the end. When Pastrana and her son died in infancy, her husband and manager had them mummified and displayed in a glass cabinet, which went on to exhibit Europe for more than a century.

It wasn’t until 2013, 153 years after her death, that Pastrana was finally laid to rest in her native home of Mexico. But in an age of greater respect for human rights and respect for disability, the bearded women no longer has to participate in such demoralising acts of ‘amusement’. That is unless you are the “postmodern performance artist”, writer and professor, Jennifer Miller who performs out of choice and desire. Since establishing her career as a juggler/ fire-eater/ performing artist well over 20 years ago, Miller, who prefers to be referred to as “a woman with a beard”, is most prominent for co-founding the acclaimed performance troupe Circus Amok in New York.

Though we are in an age of adequate health care and laser hair removal, Miller confronts the stigmas surrounding female facial by denoting it as “a symbol of power.” She isn’t the only woman to embrace her beard. Harnaam Kaur, a 24-year old woman from the UK who has been growing a beard since she was diagnosed with Polycystic Over Syndrome at 16 confounded her bullies when she signed to the modelling agency,Wanted Models.

Whilst John Galliano’s ‘freak show’ inspired SS06 Collection featured bearded male twins in sheer dresses of golden silk, last season Kaur became the first bearded woman to walk a runway at London Fashion Week for the jewellery designer Marianna Harutunia. And, the previous year saw Harnaam as the only woman to feature in ‘Beard’, an exhibition at Somerset House that explored and celebrated all shaves of the beard in 80 images.

From social outcast to female liberator, the 21st century’s Bearded Lady embodies diversity and body confidence. As 2016 marks 40 years of Punk, perhaps the bearded lady is part of that process of celebration of individual freedom. Gentlemen, you better watch out because the bearded lady is here to stay – and ready to take you on, in the gin bars of Shoreditch – and elsewhere.

Illustration by Joseph Killick
Posted by Madeleine Killick at 04:22 1 comment:

Posted by Madeleine Killick at 03:09 4 comments: 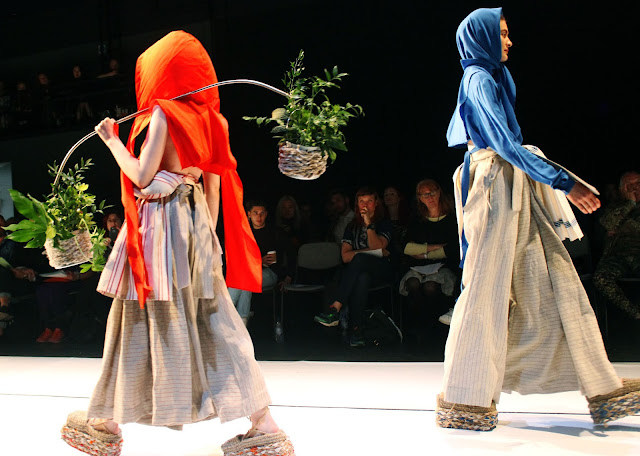 It may have started with an almost injurious trip of some towering espadrille platforms similar to that of Naomi Campbell, but the Fashion Design & Marketing designer Ieva Hoffmane debuted a collection that spirited the audience away on an enchanting journey suffused by a sense of tranquility and wholesomeness.

Though entitled ‘The Laundry Day’, which does not exactly connote scenes of the serene kind, there was a defining sense of calm beauty to the clothes, which featured sprouting shrubberies that effortlessly swayed from silver frames, like a Miró mobile.

The narrative stems from the 24-year old designer’s love of nature and the greenery of her native home, Latvia, as Hoffmane explains, “I am a child of nature, and this collection is a reflection of me.”

Soothing music may have been playing in the background but it did not counteract the infinite feeling of rawness, with rough stripy cotton drills and linens of natural stone hues scattered around the body like a washing line, hence the title. Inspired by the peasant washerwomen who go to the riverbanks to wash their clothes, the collection enlivens a clan of strong, nomadic women carrying their washing home through the woods.

Hoffmane achieves a purely organic silhouette from the sporadic layering of mismatching garments. Opening with a dainty cotton shirt with seamless sides, the lower body spills a flurry of fabrics that elegantly glide down the catwalk to the artificial motion of a wind-machine-, it does, in motion, look rather like a pile of floating bed sheets and tablecloths.

The bottom-heavy figure is supported by a pair of clunky, handmade platforms. Each garment is completed with a pair that contains braiding from the leftover fragments of fabric and string.

Upon the Baltic pursuit for clean clothing, Little Red Riding Hood makes an appearance in the form of a coral-red, hooded vest that is tucked into a pair of horizontal pinstriped flares, as well as a pleated apron with a juxtaposing, thick red vertical stripe tied to the waist. A (similar) Vision in Blue immerses the show in a sheer, cobalt blue nylon shirt with an adjoining collared headscarf. Such pops of brash colour and delicate textures generate an ambiance of femininity to the rather utilitarian look.

Not wind, rain or shine will stop this woman from completing her washing, or embracing all elements. A flutter of orange parachute silk cascades the catwalk in what looks like an oversized rain-mac, with billowing sleeves and a drawstring hood that conceals the face. And, kitted with a metal-wired rucksack, complete with compartments that hold potted plants, this woman is certainly ready to be at one with Mother Nature.

In what appears to be a declaration of love with the great outdoors, the manifestation finishes with the partnership of an oversized blue shirt, and a pair of nautical striped wide-legged trousers attached to what seems to be a cream tiered trail, similar to that of a wedding dress. Hopefully it will be a happy ending for Ieva Hoffmane as well.
Posted by Madeleine Killick at 03:01 No comments: 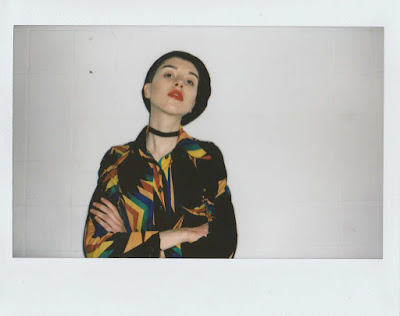 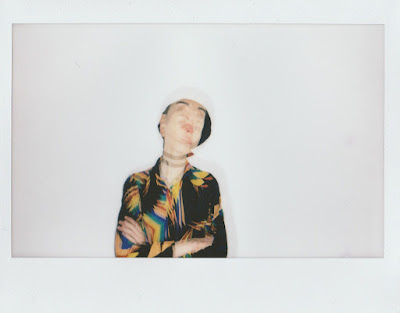 Posted by Madeleine Killick at 00:36 2 comments:

An interview with a Lord 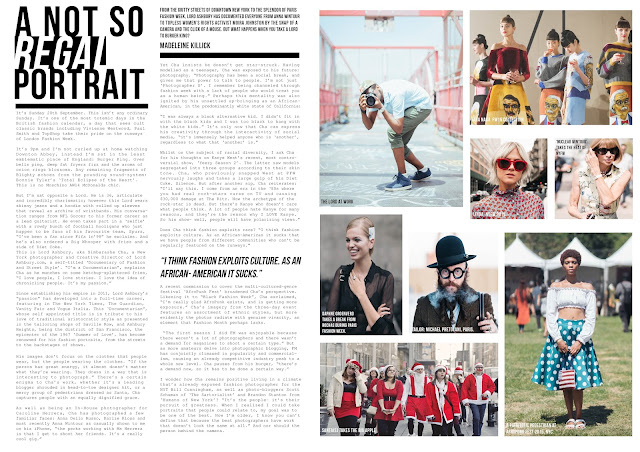 (Please click on image for large scale)
Posted by Madeleine Killick at 00:30 No comments: 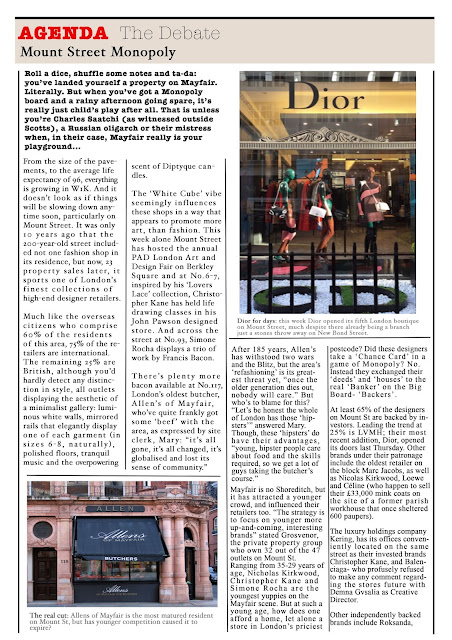 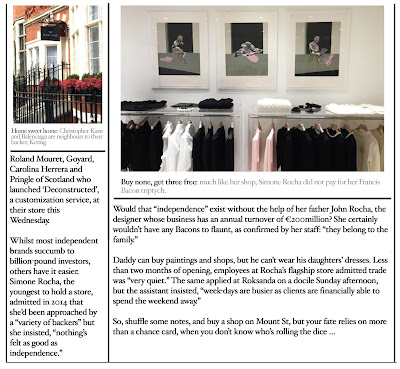 Posted by Madeleine Killick at 14:28 No comments:

The Chronicles of Grandma's Pyjamas 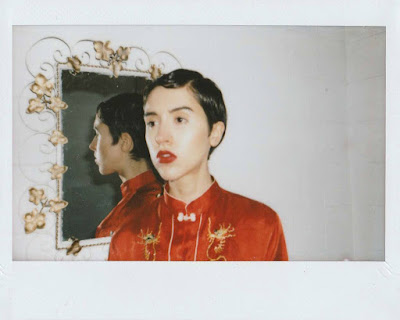 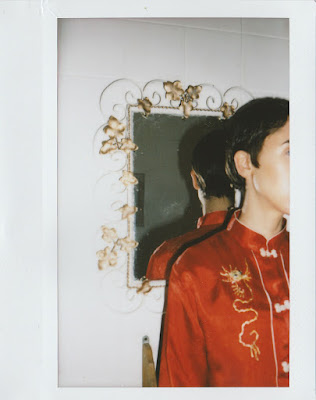 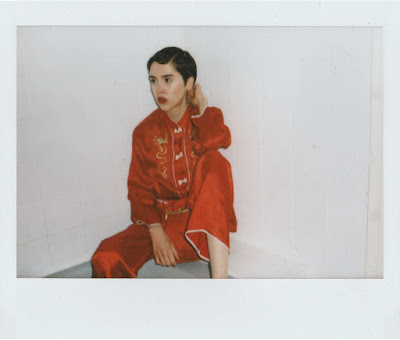 Posted by Madeleine Killick at 13:23 No comments: